Hands on the Wheel 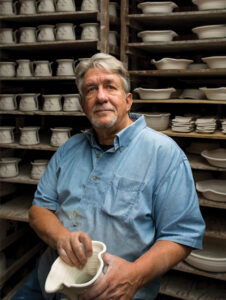 To say that Kent Follette’s pottery is built on the foundation of south Louisiana’s timeless love for cooking and communal eating is as true as stating that the Mississippi River is muddy, but as far as influences go, Japan might hold the most sway over the veteran ceramicist’s work.

That’s where Follette, originally from New Orleans, spent the early 1950s, living in a traditional, 200-year-old Japanese otaku. Follette’s father was stationed there in what was then-called Washington Heights, a housing district for families of servicemen stationed in post-V-J Day Tokyo.

Growing up next to a geisha house and traversing the same parade grounds where the Imperial Army held marches just a few years prior, Folette says he first noticed textures and color as well as the way history married with art and how both could blend to form something altogether new.

The startling differences between Japan and the United States jolted his attention to design aesthetics for the first time.

“I was in awe,” he says. “It was so different from America, from the people and the food, to the street markets, to the architecture — all these details were coming at me for the very first time.”

At elementary school in Tokyo, an artisan would visit his class each week to explain how a certain trade worked. One week it was an umbrella maker. The next, a carpenter, and so on. And during a visit to Camp Washington’s on-base hobby shop filled with sundry housewares, gadgets and diversions, Follette decided that whatever path he walked in life, he wanted to make things.

“I take pleasure in being a craftsman,” says the 68-year-old potter, husband and father of two. “Art is one thing, but really I just think of myself as a guy who likes to work with his hands.”

Follette’s hands are put to use at the potter’s wheel, and have been daily since leaving academia in 1980. From his home studio he produces roughly 50 pieces each week, just enough to keep up with demand.

Inspired by his father, who also cooked, Follette’s work is a blend of beauty and utility, a variety of multi-colored vases, mugs and pots bathed textures and inks. An ikebana wish bowl even celebrates his time spent in Japan.

“You never really know how pieces will turn out until they are fired,” he says. “It’s a secret society what happens in the kiln.”

We visit in early November, when Follette’s focus is on the five festival shows where his creations will be featured and for sale before Christmas. It’s the edge of the holiday rush, but he is always ready.

“I like the challenge of it — the craft of pottery,” Follette says. “It’s hard work. This is not magic. And honestly, I get excited every morning to create because a day doesn’t go by that I don’t learn something new.”

Pottery was brand new to Follette — who first attended Louisiana Tech as a painter — when he met his future wife, Libby, on campus in the late 1960s. Their courtship was swift, and after many years of marriage and operating a huge studio and gallery in Ruston, they moved to Gonzales to be closer to their daughter and grandson.

Follette used the move to refine his purpose as an artist. He realized just how much he valued being a part of his customer’s everyday lives.

“I wanted to simplify what I was doing,” Follette says. “No gallery commitments; sell directly to my customers; go to festivals and markets and meet the people.”

In 1994, Libby retired from her interior design career and her work in the family lumber business and began working with Kent full-time. An artist in her own right, she serves as a second set of eyes on all output, especially the elements of color and design. She’s “The Opinionator,” Follette jokes.

“Some days she’ll look at my work and go ‘This is the best thing you’ve ever made,’ and other times it’s more like, ‘OK, let me go find a hammer’.”

Whether a piece is successful or not — and most are — Follette enjoys the process of refining, because his career has become as comfortable to live in as his pottery is to hold and to use.

“When I first began making pottery, I never thought of it as a career or a new direction for me,” Follette says. “It just felt like ‘this is who I am.’ It felt natural.”

What do you do for fun when you are not working? I love to fish. It really is the best medicine for a potter.

How do you stay inspired in your craft after so many years? I stay inspired by looking at all types of pottery and using it as a starting point of my interpretation.

What’s the oddest or most interesting thing someone has requested that you make for them? We have requests for funeral urns. Once we created a pyramid for a math professor.

If you hadn’t gotten into pottery and found that people responded well to your work, what do you think you’d be doing now? I was lucky to have discovered clay and pottery. At the time I was doing a lot of painting and had just discovered the welding torch and steel. If I wasn’t working in pottery, I could see myself as a sculptor of some other kind. I would definitely be involved in the arts. I’m just not sure I could work at anything else.

This article appears in the January-February 2017 issue of Louisiana Life. 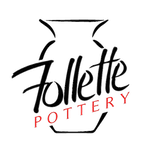